Are community-run libraries the future?

Posted by aroundtheredmap on June 10, 2013 in Uncategorized 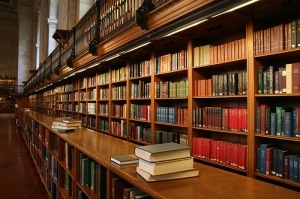 I recently got asked this at work.

Q: Are community-run libraries the future?

A: For small local libraries (such as the one I work in), yes, it probably is. With the first round of government and local council spending cuts put into action, a lot of small local village libraries have regrettably faced the axe. Luckily for this village their local previously council run library was taken over by some very dedicated local people and has now re-opened under ‘new management’. Our new library is now being run and will continue in the future to be run very much in mind to what local people want. Opening hours, group activities, books etc will all be influenced by what the local people want from the library.

Council run libraries are becoming more and more corporate. Like supermarket stores and high-street shops they are heading towards looking and feeling the same right down to lay-out and to the books on the shelves. What our library, being community run, is able to offer is a more relaxed and ‘local’ feel. Before we had to get signs, leaflets and posters checked before we could display them in the library, but now that corporate control has gone.

It is the smaller, local libraries that need to, and should have, a local feel to them. With a relaxed atmosphere and almost like a village-hall meeting place. It should have those books on the shelves that that particularly community is most interested in reading, and should be able to accommodate for groups who want to use the library facilities, whatever that group may be (writing, reading, local history, knit n natter). I feel that a community-run library has the adaptability to make these changes and most importantly decisions regarding the library, by the people running and using it. Decisions and recommendations by those on the ground level. But I think this is mainly limited to local village libraries, which cater for a relatively small population.

Larger run city libraries should always remain under council ‘control’. It is here that people generally go to get books out. Yes, they do do more things and put on groups and talks and provide other services, but in my experience both as a librarian and a user of libraries, books are the main thing – especially now as the larger libraries are heading to primarily self-service use. The larger libraries simply have more choice and more variety. They have more space and so are able to do this. So if the larger city libraries are kept run by the council, then the other smaller local village libraries (not all though) can have a vibrant future run by a community group, where the local people get what they want.

It would have been nice for all our libraries, large and small to remain under council funding but unfortunately government cuts this is no longer a reality. So out of that disaster, a positive can be gleaned from it for local libraries. Individuality, adaptability and tailoring in communication with what the local people want from their library. As previously mentioned, council-run libraries are heading towards self-service use. And more often than not only self-service use. In many there is simply no option other than to use a self-service machine. This takes away the personal touch that most people enjoy when using a library. This is something that community-run libraries will hopefully steer clear from.

← The importance of…taking time off.
Ten Things You Can Do With Short Stories →