Posted by aroundtheredmap on September 25, 2014 in Uncategorized

…..I’ve kept it brief (and not always in complete sentences) just to give you a sense of what it was like as a sailor in the 16th century…… 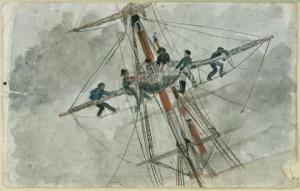 Life aboard a vessel

In good weather and constant wind shipping required few or very little sail changes, therefore running repairs was a sailors main priority, for example when a sail blew out or tore.

Masts and yards cracked or were carried overboard. Blocks and tackle broke or jammed. Such incidents occurred in heavy weather and required immediate and often heroic action as men ran aloft to clear away the debris and restore the ship.

Leaks also were a massive and almost constant problem.

Disasters nearly always occurred on a voyage but often weeks between each other, filled with endless maintenance. In good weather damp, wet sails dried, bedding was brought aboard deck to air and the hatches were open to air the decks below. Every piece of timber received attention, repairing, replacing, scarping and caulking, greasing and painting. And when the ship docked at a port repairs were conducted that normally weren’t able to be done at sea.

But despite this view of shipping in good weather, life as a sailor was a dangerous one. When bad weather hit, the only hatch was closed leaving the men in airless and dark living spaces as naked flames were prohibited below deck; and it was cramped. Despite the average height for a man being 5 foot 5 inches, they still endured tight and cramped spaces. Hammocks were hung from beams inches apart. Here the men ate and had time off. The air was foulsome and suffocating. The conditions were not only damp they were wet. It was often made wetter by the pervading dampness permeating the sides of the ship and by water pouring through imperfectly fitted hatchways. Smells of unwashed men and bad food attracted rats.

Arguments and fights between the men were common, as were times of joviality, however boys were usually bullied and older men were belittled or abused.

Strange happenings at sea. Witchcraft was used to explain many things that happened at sea.

Shipwrecks were a constant problem and fear, with sailors developing a strong sense of self-preservation.

While only less than one per cent died on a voyage, usually through accidents or shipwrecks, accidents and deaths did occur. Sailors were killed or drowned as a result from a fall or washed overboard, loose tackle posed dangers. Death by disease was not as dramatic as accidental death. Dysentery – the bloody flux, scurvy and typhus – ship fever, were the most likely culprits to attack crowded ships. Poor nutrition, and poor sanitary conditions did not help matters.

← How long should a blog post be?
The Crest →