Posted by aroundtheredmap on January 11, 2016 in Uncategorized 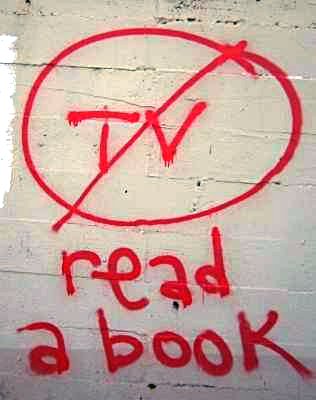 We’re all generally watching more TV than we ever had before. And who can blame us – there’s some amazingly addictive TV shows out there. And anyone who can testify that they’ve been so hooked by a TV show will agree with me that a weekend can easily be taken up by that one TV show watching episode after episode.

But sometimes you get to a point where you have to say – look I watch far too much TV. (Live TV, DVDs/films, Netflix, Now TV, Amazon Prime….) All these different forms of TV count.

As global societies who watch too much TV we’re slowly suffering. Our bodies are getting lazy as couch potatoes, our postures are terrible as we snuggle up on the sofa to watch one more episode. Our minds are dulling. No matter how informative or interesting or intrusive a TV show or film may be it can be nowhere near as stimulating as reading a book. Our social skills are suffering. As a couple who watch TV, while we do talk, sometimes it just tends to be about the mundane topics of work and running the home. (What do you want for tea? Etc)

And that’s why starting today my partner and I have decided to cut TV out of our lives for a week. It may not sound like much but I think we’ll find it much more difficult than we may imagine – for people whose instinct when we come home is to turn the TV on. But this is the habit that I want to get out of. We’ll start out at just a week and see how it goes. Hopefully it’ll lead to us watching less TV – like only switching on the TV set a few nights a week instead of everyday. (This break in TV also includes watching things direct through the computer too.)

Already I’m able to write this as normally I’d be watching the news right now. Of course, it would be nice to be able to cut technology out of our lives completely to switch of entirely for this week – but we both use computers every day at work so that’s not practical.